THESE VIOLENT DELIGHTS (These Violent Delights #1) 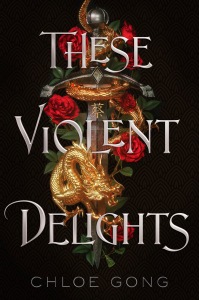 Perfect for fans of The Last Magician and Descendant of the Crane, this heart-stopping debut is an imaginative Romeo and Juliet retelling set in 1920s Shanghai, with rival gangs and a monster in the depths of the Huangpu River.

The year is 1926, and Shanghai hums to the tune of debauchery.

A blood feud between two gangs runs the streets red, leaving the city helpless in the grip of chaos. At the heart of it all is eighteen-year-old Juliette Cai, a former flapper who has returned to assume her role as the proud heir of the Scarlet Gang—a network of criminals far above the law. Their only rivals in power are the White Flowers, who have fought the Scarlets for generations. And behind every move is their heir, Roma Montagov, Juliette’s first love… and first betrayal.

But when gangsters on both sides show signs of instability culminating in clawing their own throats out, the people start to whisper. Of a contagion, a madness. Of a monster in the shadows. As the deaths stack up, Juliette and Roma must set their guns—and grudges—aside and work together, for if they can’t stop this mayhem, then there will be no city left for either to rule.

Kirkus’ Best YA Historical Fiction of 2020

Blood, violence, gore, character deaths, explicit description of gouging self (not of their own volition), murder, weapon use, insects, alcohol consumption, parental abuse.

OUR VIOLENT ENDS (These Violent Delights #2)

Shanghai is under siege in this captivating and searingly romantic sequel to These Violent Delights, which New York Times bestselling author Natasha Ngan calls “deliciously dark.”

The year is 1927, and Shanghai teeters on the edge of revolution.

After sacrificing her relationship with Roma to protect him from the blood feud, Juliette has been a girl on the warpath. One wrong move, and her cousin will step in to usurp her place as the Scarlet Gang’s heir. The only way to save the boy she loves from the wrath of the Scarlets is to have him want her dead for murdering his best friend in cold blood. If Juliette were actually guilty of the crime Roma believes she committed, his rejection might sting less.

Roma is still reeling from Marshall’s death, and his cousin Benedikt will barely speak to him. Roma knows it’s his fault for letting the ruthless Juliette back into his life, and he’s determined to set things right—even if that means killing the girl he hates and loves with equal measure.

Then a new monstrous danger emerges in the city, and though secrets keep them apart, Juliette must secure Roma’s cooperation if they are to end this threat once and for all. Shanghai is already at a boiling point: The Nationalists are marching in, whispers of civil war brew louder every day, and gangster rule faces complete annihilation. Roma and Juliette must put aside their differences to combat monsters and politics, but they aren’t prepared for the biggest threat of all: protecting their hearts from each other.